Biomap Cores and Threats by Town

map list
The maps show land uses as of 2005.
Base Layers
Aerial Map 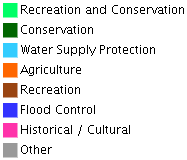 Percent of unprotected core that is developed

There are several layers of data present in this map collection. The BioMap Cores are shown in colors ranging from green (less threatened) to red (more threatened). As you zoom into the map, polygons of recent development will appear when you get near the "town" scale. In addition, if you overlay one of the layers showing protected land, you can get a very good idea as to how recent development is or is not threatening the remaining unprotected BioMap Cores.

In order to investigate threats to BioMap Core areas, we identified the portions of each Core that were unprotected, and then measured how much new development was present in 2005. As delineated in 2001, the BioMap Cores could contain development inside their boundaries. Large clusters of development were segregated into separate areas that were inholdings within the Core Habitat. These interior polygons were removed for this analysis. As a result, the development considered here is mostly new development. The amount of recent development in the Core is an indicator of development pressure on the remaining Core Habitat. This map shows the unprotected Cores in yellow, orange, and red that are at least 5% developed.